On "Good Cat in Screenland", a film by Richard Cohen

On Good Cat In Screenland by Richard Cohen


Since the past has ceased to throw its light on the future, the mind of man wanders in obscurity
— Alexis de Tocqueville
The beauty of narrative is that any story is full of other stories. That’s what Good Cat in Screenland is — full of stories. Or should I have said the beauty of narrative is that it’s not essentially linear, not unless you really straighten it out, but then that would be no way to make sense of the events. The point is to make sense of them, but to do that you have to work out how to tell them.
Los Angeles, at least for someone who’s never been there, can seem like a fantasy city of movie locations shuffled around in fictional worlds. The idea of a ‘Los Angeles itself’ almost sounds like a contradiction in terms. In fact Los Angeles itself is sometimes described as a shuffle of locations rather than a textbook city with a ‘proper’ centre. Good Cat In Screenland, like Richard Cohen’s other films, is set in the geography and society of this ‘Los Angeles itself’. The films are about the urban communities and politics of Los Angeles. They are rooted in urban, social, political and architectural locations.
Culver City is one of those Los Angeles locations. It sprung up as an early twentieth century development of real estate and movie studios in western Los Angeles. The City’s motto is ‘The Heart of Screenland’: It flourished in the movie boom, perhaps declined a bit along with the big studios, and by the late 1990s it looks like it must have been ready for an injection of capital, for resurgence and redevelopment. Good Cat In Screenland starts with a Chinese capitalist, Abraham Hu, riding into town.
Washington and Culver Boulevards cross at a sharp angle, like a pair of chopsticks. The Culver Hotel is held in the narrow triangle between them. It’s shaped like a slice of pie. It looks like a confection with a crimped, corbelled crust. It’s filled with show business history. John Wayne once won it gambling. After an opening shot of eucalypts on a hillside above the city, we have a long shot of the hotel standing above the skyline. Seen side-on from a distance it looks like a doll’s house or a movie set with nothing behind it. 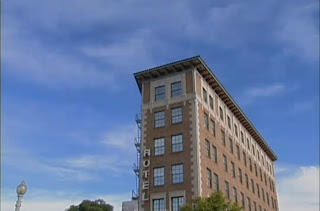 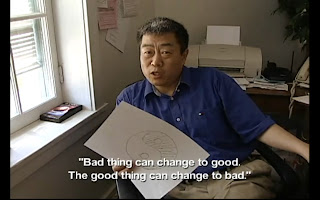 On a number of occasions Joseph makes some philosophical reflections. He quotes Tao wisdom, and Mao, and Deng. Nearly always it’s with a kind of sense of the inadequacy of these things. They have their value but only as the wisdom of the past and not so much for forging the path to the future. When he’s struggling Joseph finds he has to fall back on the precepts of ‘image’ and ‘reputation’, and during his most difficult battles with staff and contractors all he can cite is ‘Reduce costs! That’s management!’ As it is for Joseph coming to terms with his experiences, telling these events on film seems like a matter of finding a way through. The beauty of Good Cat is that it manages to use events from different times to illuminate one another. This is the achievement of the writing and editing. It manages to do two things: it shows what is almost the objective obscurity of these events, at least for those who wander through them; but with its own kind of tender, narrative determination it leads us through, it manages to gather some light from the past to throw on the future.
Posted by northbank at 12:21 PM